On Wednesday, the children showed off their cooking skills by creating a delicious dish based on an ancient Roman recipe. 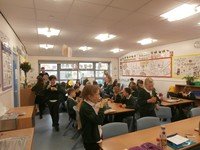 The children worked in groups to chop, slice and dice the veggies and herbs needed. They also contributed towards making a tasty dressing and the stock needed to cook everything in. Once they had cleaned up, they set about creating a recipe book before tasting the fruits of their labour. Though some didn't like it, everyone tried it and most found it to be a tasty dish. We even gave some to Mrs Beardwell to celebrate her birthday and she said it was the best tasting lentil stew she had tried that week!

We use necessary cookies to make our site work. We'd also like to set optional analytics cookies to help us improve it. We won't set optional cookies unless you enable them. Using this tool will set a cookie on your device to remember your preferences.

Necessary cookies enable core functionality such as security, network management, and accessibility. You may disable these by changing your browser settings, but this may affect how the website functions.